Meet the Holiday Companions All our holiday companions are skilled local guides with big experience in hospitality and tourism For people who love traveling but hate being lonely during their trips we have found Internet site connecting you to local tour guides and travel companions.    Mac, Bangkok, Thailand Tour guide, Companion, Concierge Languages: English … END_OF_DOCUMENT_TOKEN_TO_BE_REPLACED

Richard Ammon A small picturesque gem in central Europe, the Czech Republic has progressed far since communism ended in 1989. Most notable is the legalization of same-sex relationships and the open attitude Czech people have toward homosexuality. Except for minor right-wing and religious protests the LGBT community is alive and well with numerous organizations, venues … END_OF_DOCUMENT_TOKEN_TO_BE_REPLACED

Beng Mealea or Bung Mealea (Khmer: ប្រាសាទបឹងមាលា, its name means “lotus pond”) is a temple in the Angkor Wat period located 40 km east of the main group of temples at Angkor, Cambodia, on the ancient royal highway to Preah Khan Kompong Svay. 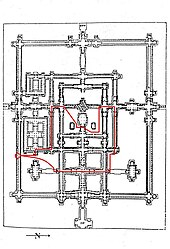 Map of Beng Mealea, from a drawing by Leon de Beylie (1849-1910). In red the partially equipped path used to visit the temple.

It was built as a Hindu temple, but there are some carvings depicting buddhist motifs.[1] Its primary material is sandstone and it is largely unrestored, with trees and thick brush thriving amidst its towers and courtyards and many of its stones lying in great heaps. For years it was difficult to reach, but a road recently built to the temple complex of Koh Ker passes Beng Mealea and more visitors are coming to the site, as it…

In guidebooks, Banteay Samray is often called Bantay Samré, the latter being a combination of Khmer transcription and French spelling. Samray is the name of an ethnic group of people in the Phnom Kulen area. The first “a” in “Samray” sounds similar to an “o”.
Banteay Samray was cleared by a French archaeological team of Maurice Glaize in 1930. After extensive restoration work between 1936 and 1944 according to the method called Anastylosis, this temple is one of the finest and most complete Khmer monuments now. Undoubtedly, Banteay Samray in its present condition is Angkor’s most significant flat temple from the Hindu period and the second most important example of the classical style of Angkor Wat, though not of such enormous size as Beng Melea outside Angkor or Phimai in North East Thailand.

Like Angkor Wat, Banteay Samray was obviously dedicated to Vishnu, though no inscription was has yet been…

Pre Rup (Khmer: ប្រាសាទប្រែរូប) is a temple at Angkor, Cambodia, built as the state temple of Khmer king Rajendravarman and dedicated in 961 or early 962. It is a temple mountain of combined brick, lateriteand sandstone construction.

The temple’s name is a comparatively modern one meaning “turn the body”. This reflects the common belief among Cambodians that funerals were conducted at the temple, with the ashes of the body being ritually rotated in different directions as the service progressed.

Pre Rup was dedicated to the Hindu god Shiva, and it is probably located on a former shivaite ashram, built by Yasovarman I in the previous century. Perhaps it was standing at the centre of a new capital city built by Rajendravarman, with the southern dike of East Baray as northern city limit, but nothing of the dwellings survived and this “eastern…

Keep abreast of the emerging foodie scene in Phnom Penh. Kep offers some of the best accommodation in the Kingdom – as well some truly fantastic ocean views. Take a day out and reward yourself with some top-notch treatments at our pick of the best pampering hotspots in the capital Spend a day with … END_OF_DOCUMENT_TOKEN_TO_BE_REPLACED

Short shorts for guys with thick thighs – with Sean Austin – 1

SEX TIPS – So you think you’re good in bed?